The growth of different types of pocket watches has a rich history beginning with an earlier type of watch known as the Nuremberg Egg in the 16th century. Then, in the 17th century, the pocket watch as we know it today began taking shape after King Charles II introduced the waistcoat to his English court. This change in fashion sparked an evolution in pocket watch design, shaping their watches to fit the pocket of a waistcoat better.

In this guide we’ll look at the following types of pocket watches: 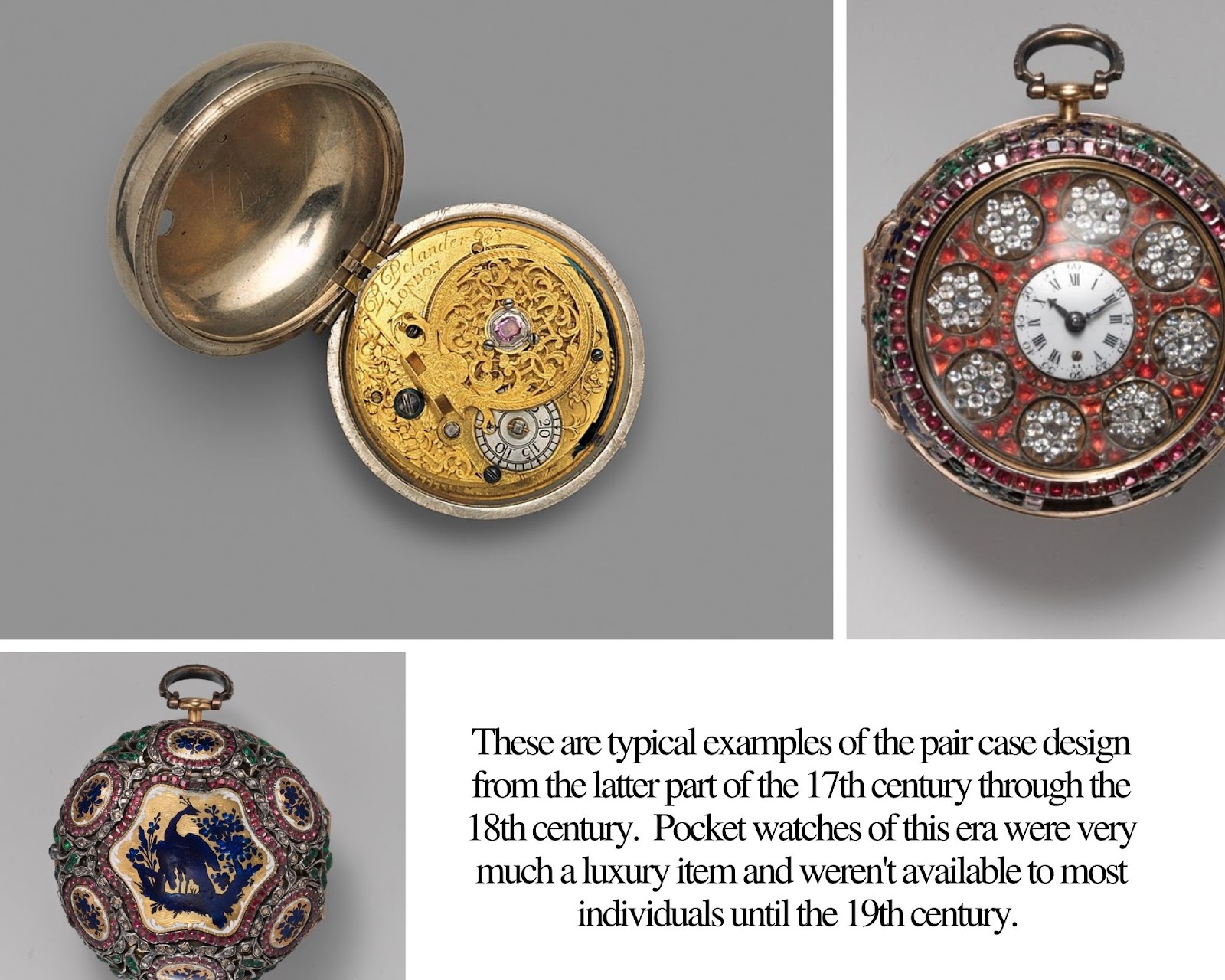 This type of watch case was usually ornate and fell deep in the luxury item category of the 18th century. It wasn’t until the 19th century that pocket watches began to fall in the price range of the average person.

Interestingly, near the end of the 18th century into the early 19th century, sailors were some of the first individuals outside of elite society to begin using pocket watches when watchmakers began making and marketing their timepieces for use at sea.

These sailors often wanted images painted onto their dials, and thus began the practice of decorated dials. 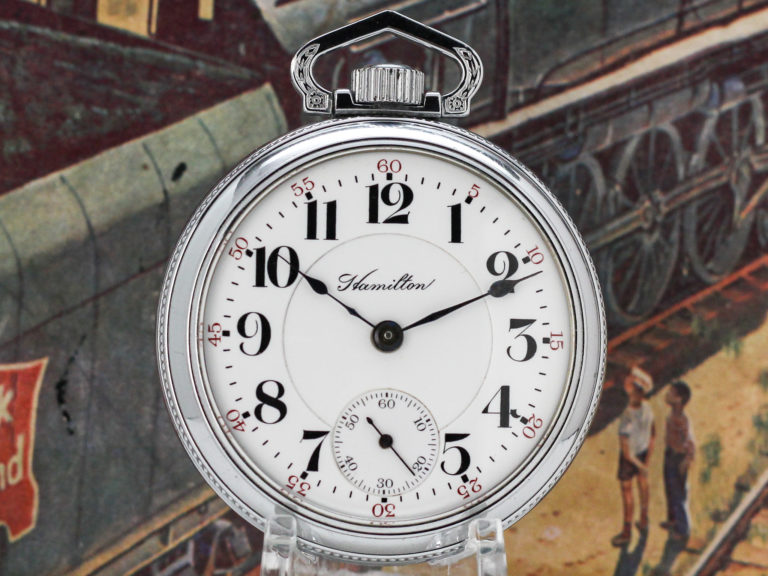 An open face watch case as its name implies means the crystal (glass covering the dial) is exposed, with nothing to cover it, and is one of the oldest styles of pocket watch cases. The time can be quickly read without the need to open any covers. The crystal and case back were typically hinged, threaded, or snapped into place.

In America, from the 1890s on, the open face pocket watch case was a required feature on railroad grade watches, according to the railroad timekeeping standards established by W.C. Ball. 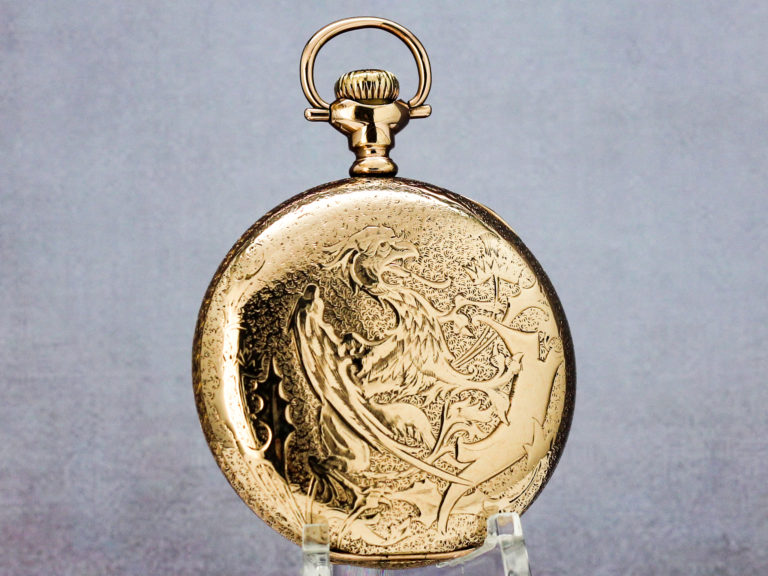 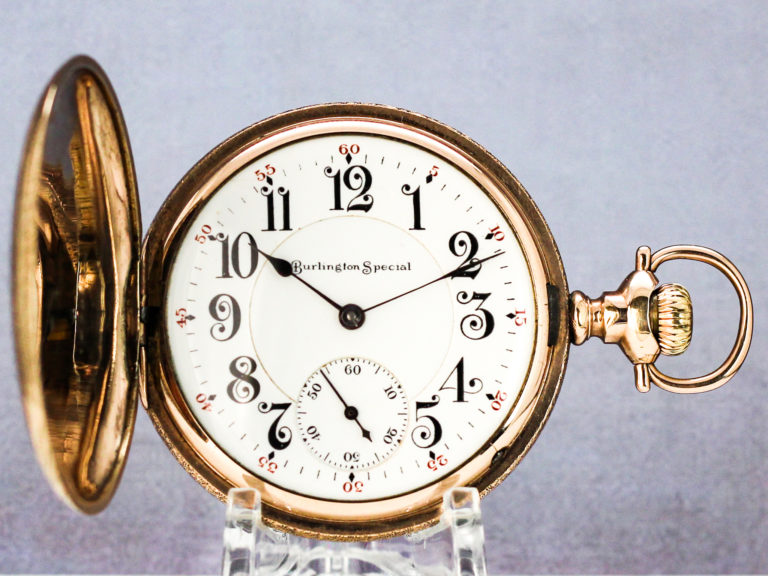 The hunter case, also known as the full hunter, was developed because of the fragility of the glass crystal and enamel dial on pocket watches. The hunter case consisted of a durable spring-hinged cover that closed over the pocket watch’s face.

The name “hunter” originated in England, at the height of fox hunting’s popularity. These fox hunters enjoyed the convenience of being able to open their watch with one hand while holding the reins of their “hunter” (horse) in the other hand.

The hunter case is also known as the savonnette after the French word for soap (savon) because of its resemblance to a round bar of soap. Most antique and vintage hunter cases have the lid-hinge at the 9 o’clock position with the stem, crown, and bow at the 3 o’clock position.

The half hunter case, also known as the demi hunter, is a further development of the hunter case that enabled the user to check the time without opening the case. It was a compromise between protection for the crystal and dial while allowing the user to quickly reference time. These cases featured a small window through which you can see the hands and the hours are marked on the outer lid.

Watches in this type of case frequently come equipped with a skeleton dial that enables the user to observe the mechanical workings of the watch behind the hands.

The double lids when opened allow the watch to stand freely and thus serve as a desk clock as well. Over the years the double hunter has grown in popularity and it is one of the more expensive watch case designs.

The swing-out case also known as a swing-ring case is an open face style case that can have a variation of hinges on the crystal, dial, and movement, which allows the user to access the movement by swinging it out of the case back.

The swing-out case was introduced shortly after the invention of stem-winding. It was thought that this type of case did a better job of preventing soot and dust from infiltrating the interior of the watch while aboard steam locomotives; where the burning and shoveling of coal made for an inhospitable environment for the delicate working parts in the watch’s movement.

The salesman display case or salesman’s sample case was a specially made type of watch case not available for sale to the public. Most watchmakers of the late 18th and early 20th centuries distributed these display cases to jewelers and other retailers for the purpose of demonstrating the watch movement at work, without the risk of fouling up the mechanisms with dust and debris.

Furthermore, the jeweler was able to demonstrate the watch movement to a customer without wasting time removing the case back cover. Many models were simply intended to hold the movement for display and were rather utilitarian. The pocket watch salesman display case was usually in a size 16 or size 18 configuration and was usually stamped out of nickel.

Several watch companies, including Hamilton, Illinois, and Dueber-Hampton stamped their company name on the case, and some Waltham Watch Co. examples of this type of cases are stamped with the company name as well.

Because nickel is such a durable metal and has little to no scrap value, a large number of nickel-stamped examples of this pocket watch case type still exist. Due to the trend of scrapping old cases for their precious metals continues, the salesman display cases are experiencing an increasing level of demand, especially for showing off some of the more interesting movements out there.

For more than a century it has been the practice of many to scrap pocket watch cases to reclaim the precious metals used in their construction. However, as time has passed this practice has served to increase the rarity and therefore the value of many cases that oftentimes transcends the value of gold and silver extracted.

In one notable instance mentioned in an article about scrapping pocket watch cases in The New York Times, an individual scrapped a German-made pocket watch from the 19th century for $1587 while neglecting to investigate the historical value of the watch.

As it turned out, the watch was worth four times as much, $6,348 on the German vintage pocket watch market. Furthermore, as the number of these fine vintage timepieces continues to disappear, we are reaching a critical point where history is being lost.

The techniques and artistry employed on many of these antique pocket watches are no longer possible to reproduce in exact detail. And when you add in the historical significance of these timepieces, their historical value, and growing rarity, we are now at a point where individuals scrapping these old timepieces may, in fact, be missing out on profits far greater than the scrap value of the metals.

These days it literally pays to investigate the history of an old pocket watch before making the decision to scrap it. One watch, once owned by Edgar Allen Poe, is valued at $120,000, and with the elusive nature of history and personal belongings, you never know, so it pays to investigate the value of a timepiece and any potential links it has to history before melting it down.

The Resurgence of Vintage Types of Pocket Watches

Because of their historic value, horological value, and fine craftsmanship the popularity of pocket watches has surged as new generations of individuals are discovering and falling in love with these stylish timepieces of the past.

For collectors and individuals who have a preference for wearing period-correct timepieces, learning more about the history and operation of antique pocket watches is becoming increasingly relevant.

If you want to learn more about vintage pocket watches and find period-correct timepieces in peak condition, we invite you to subscribe to our newsletter and visit our carefully curated collection of vintage timepieces in our store at www.thepocketwatchguy.com.